Slaves to the screens 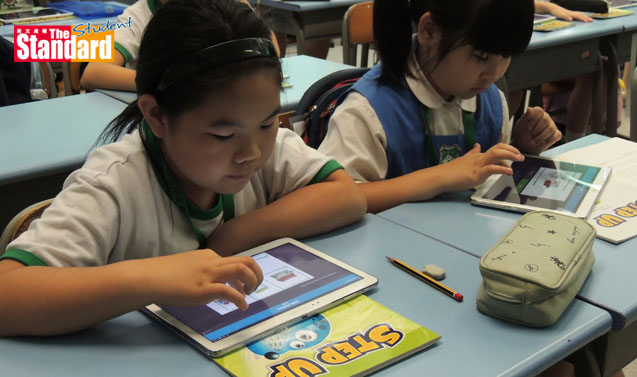 People are increasingly embracing digital electronic products as necessities of daily life. But many studies have found improper use of them can damage our health. How can we enjoy these modern gadgets without being harmed by them?

HONG KONG parents are letting their children use digital screen devices at an increasingly young age. Some may think it is good training in IT skills, others may do so because their children just like these devices.

Children are fascinated by the colourful moving images on the easy-to-operate touchscreens and attracted by the cute sound effects. They will engage with these devices for hours without ‘bothering’ their parents.

Seeing such captivating effects, some parents even use smartphones and tablets as if they are pacifiers. This is a very irresponsible practice. Children may seem happy and content when playing with these devices, but their health could suffer.

Amid growing concerns, the Health Department formed the Advisory Group on the Health Effects of Use of Internet and Electronic Screen Products. It recently published its report, and the findings are far from comforting.

Tablets for toddlers
THE study found the median age of pre-school kids who watch television is eight months old.

By 16 months, toddlers have started using tablet devices, before graduating to computers by age two. The youngest electronic screen product user was only one month old!

Only 14 percent and 12 percent of parents keep their children company when they are using tablets and computers respectively.

The study also found 20 percent of primary students use a computer for more than three hours a day, even as 50 percent of parents believe their children are using computers too much.

Parents note that prolonged computer usage has encroached on the normal daily lives of their children, and 64 percent of them have had frequent conflicts with their children over the use of digital electronic products.

About 37 percent of students admit they would give up outdoor activities for computer time, and close to half say using these products has cut into their sleep hours and affected their schoolwork.

Bad eyesight, unhealthy posture and obesity
EXCESSIVE use of electronic screen products can harm the health of young users in many ways.

Children’s eyeball development can be hampered if they start using these products too early.

A Chinese University of Hong Kong study found more children between the ages of two and six have myopia – rising from 2.6 percent in 1996 to 6.3 percent in 2006 – and the trend was linked to screen product usage.

Serious myopia can cause conditions such as macular degeneration or glaucoma, which can lead to blindness.

The advisory group pointed out that staring at a screen for a long time can cause visual symptoms like ocular discomfort, eyestrain, dry eye, headache, blurred vision and even double vision. Since IT screen product usage is becoming more prevalent, the problem could worsen further.

Another health effect related to screen product use identified by the advisory group is bad body posture causing damage to tendons and muscles.

The group also agreed that sitting before a screen could lead to obesity, due to a sedentary lifestyle and other associated behaviours, like snacking and decreased sleep time.

Psychological effects
IMPROPER use of electronic screen products could also have a bad effect on the psychological well-being of the users.

Many people are so reliant on smartphones and tablets for socialising that they feel compelled to check for new messages every few minutes. This condition is so serious that it has even got a name: FOMO – Fear Of Missing Out.

Scientific studies found that overindulgence in virtual networking could harm the development of social skills in the real world.

Digital detox
THE attachment to electronic screen products can be so serious that it becomes an addiction, and there are even special facilities to treat the condition. The term ‘detox’ is used to refer to the process of cleansing the body of drugs, alcohol or other toxins. Now it is also employed in computer product usage, and is referred to as ‘digital detox’.

Like any health issue, early detection helps treatment. To help people detect addiction to smartphones, the University of Bonn in Germany has developed a new app, Menthal, which tracks people’s patterns of usage.

The ultimate irony
IT is ironic that parents who impose strict restrictions on their children in the use of screen products are often those in the IT business. The late founder of Apple, Steve Jobs, did not allow family members to use digital products at dinner time, reserving it for conversation on interesting subjects.

Digital products enrich our lives and make communication more efficient and convenient. But we must be aware of their potential dangers, and exercise self-discipline so that we do not become their slaves. 1. Report of Advisory Group on the health effects of use of internet and electronic screen products

3. How to avoid computer eye strain