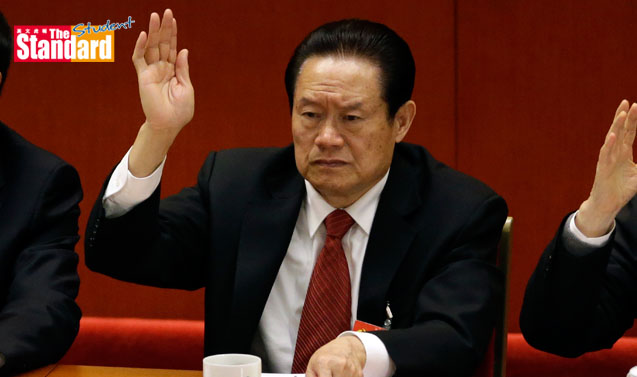 CHINESE authorities have arrested former domestic security chief Zhou Yongkang(周永康) and expelled him from the ruling Communist Party (共產黨), accusing him of crimes ranging from accepting bribes to leaking state secrets and setting the stage for his trial.

Zhou, 71, is by far the highest-profile figure caught up in President Xi Jinping’s (習近平) crackdown on corruption.

He is also the most senior Chinese official to be ensnared in a corruption scandal since the Communists swept to power in 1949 and the highest-ranking to be prosecuted since the fall of the Gang of Four (四人幫) in 1976 following the Cultural Revolution (文革).

In a terse statement released by the official Xinhua News Agency (新華社) at midnight on Friday, the party’s elite, decision-making Politburo (政治局) said Zhou’s case had been handed over to judicial authorities.

The party began its probe into Zhou, one of China’s most powerful politicians of the last decade, in July, following months of rumours and speculation that he was in trouble.

“He took advantage of his posts to seek profits for others and accepted huge bribes personally and through his family.

“He abused his power to help relatives, mistresses and friends make huge profits from operating businesses, resulting in serious losses of state-owned assets,” the report said.

Zhou also leaked party and state secrets, and took money and property either himself or through his relatives, Xinhua said, without providing details.

In a common accusation used to discredit fallen officials, Xinhua said Zhou had committed adultery with a number of women and had “traded his power for sex and money”.

Xi has warned, like others before him, that corruption is such a serious problem it threatens the party’s survival.

“[Corruption] is a tumour eating away at the party’s health and its resolute excision is a necessary demand to uphold the party’s character, aims and leadership and to consolidate the party’s power and basis for exercising that power,” the People’s Daily (人民日報) wrote in a commentary on its website on Saturday.