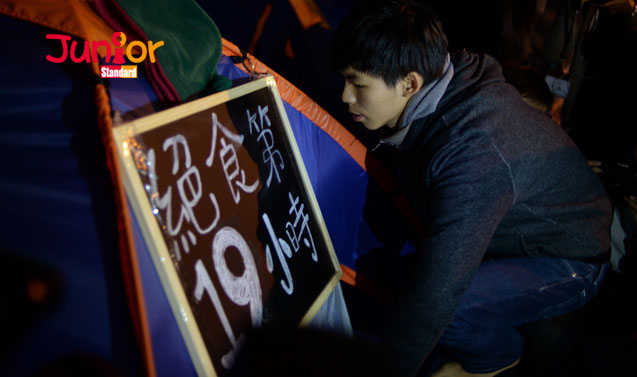 JOSHUA Wong Chi-fung (黃之鋒) and two other student leaders began their hunger strike last Monday, vowing to continue until the government decides to talk to them over restarted political reform talks.

“If the government is willing to have a dialogue with students over the restart of the five steps on political reform, we will stop the hunger strike,” Joshua Wong said.

Owing to the cold weather, the hunger strike may exact a greater toll on their bodies.

“We only hope to use (our) bodies to arouse the awareness of society over the issue,” he said. Wong rejected suggestions there is a divide between Scholarism and the Federation of Students (學聯), although no federation member has joined the hunger strike.

Scholarism said it respects the decision by three Occupy Central (佔領中環) leaders to surrender to police. “If Benny Tai Yiu-ting (戴耀廷) had not suggested civil disobedience, there would be no umbrella movement. His effort should not be overlooked.”