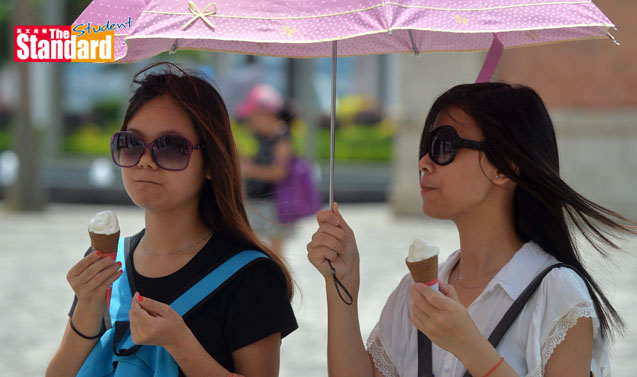 The World Meteorological Organization (WMO, 世界氣象組織) said the global average temperature in January-October was 0.57 Celsius above average, the same as in record hot year 2010.

The ocean temperature set a new record in the nine-month period, while land temperatures were the fourth or fifth highest since record-keeping said in a report released at UN climate talks in Lima (利馬), Peru, and at its headquarters in Geneva (日內瓦).

“The provisional information for 2014 means that 14 of the 15 warmest years on record have all occurred in the 21st century,” WMO Secretary-General Michel Jarraud (米歇爾雅羅 ) said in a statement. “There is no standstill in global warming.”

Climate sceptics point to a perceived hiatus in the temperature rise since 1998, an exceptionally hot year, to support their claims that man-made warming is not a big problem. Most climate scientists reject that idea. of Princeton University (普林斯頓大學) said the long-term warming trend is combined with natural variations that tend to be cyclical, with a period of lower-than-average warming followed by a period of rapid warming.

“Whether such a period is about to begin, we cannot say, but the hot 2014 is a reminder that the warming never stopped and the long term trend is up, up, up,” Oppenheimer said.

Parts of the planet were cooler than average, including large areas of the US, Canada (加拿大) and central Russia (俄羅斯). But most of the world experienced temperatures above Africa (南非), Australia (澳洲) and Argentina (阿根廷) in January and in large parts of South America (南美洲) in October, according to the WMO assessment, which was based on two global data sets from the US and one from Europe (歐洲).

Ocean temperatures were particularly high in the northern hemisphere from June to October.

“Around 93 percent of the excess energy trapped in the atmosphere by greenhouse gases from fossil fuels and other human activities ends up in the oceans,” the WMO said.