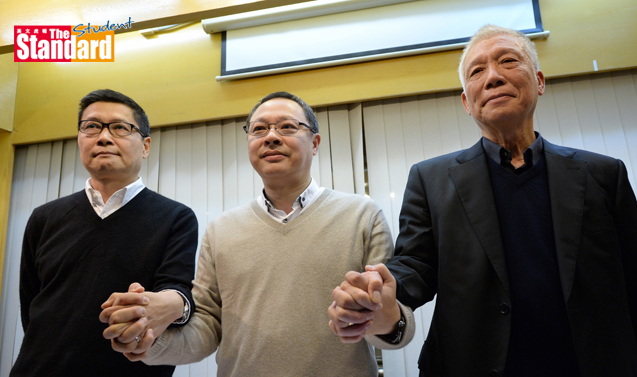 They urge students and other activists to retreat from “dangerous” occupation zones as they believe occupiers should protect themselves at this “critical moment” when some frontline police seem increasingly “out of control”.

A tearful Chu, 70, said seeing “defenceless” protesters being hit or struck left him pained and sad.

“My duty and mission, my expectation for myself, is very clear: I had hoped to take everyone who took part in this movement safely home,” the Reverend said.

Tai added: “I simply don’t know how much more violence they would inflict on occupiers in the future.”

He denied receiving any information or warnings in calling for a retreat and said they are certainly not abandoning the occupiers as protests enter their tenth week.

The trio’s move came after weeks of speculation on when they would follow Occupy Central’s original script to be arrested and bear the legal consequences of breaking the law.

“Surrendering is not an act of cowardice, it is the courage to act on a promise,” said Tai.

“To surrender is not to fail, it is a silent denunciation of a heartless government.”

Asked if he felt abandoned by those who initially made a pledge last year to both occupy and surrender, Tai said the pledge was not a contract and he understands that people may have changed their minds as circumstances have changed since he announced the start of the occupation on 28 September.

The trio is prepared to admit to a violation of Section 17A (3) of the Public Order Ordinance by taking part in an unauthorised assembly.

But they may face other charges, such as inciting the public to take part in an illegal assembly.

Tai also denied the movement had failed as the trio believes it has successfully aroused a civic awakening across generations.