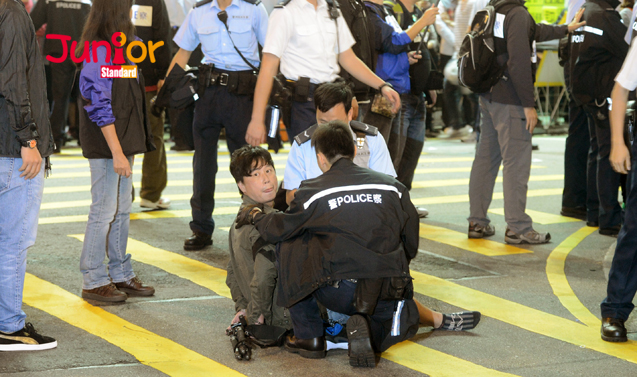 AT least two journalists – a technician and a photographer – were arrested during protests in Mong Kok (旺角) last week.

An unedited video uploaded on to the Internet shows the technician and a reporter walking along the street when they are surrounded by officers who then subdue the technician. Now TV technician Lee Siulung (李小龍), accused of assaulting a policeman with a ladder, was released after 27 hours because of insufficient evidence. A spokesman said Lee refused to agree to bail, adding that investigations are continuing and police reserve the right to prosecute.

Then last Thursday, an Apple Daily (《蘋果日報》) news photographer who was covering the Mong Kok protests was arrested on suspicion of assaulting a police officer and resisting arrest. Footage of Wong Chun-lung (王俊龍), wearing his press pass, was posted on the Apple Daily website of him being wrestled to the ground by six police officers.

Wong was taken to North Point Police Station (北角警署) and later released on bail. The police said that Wong had hit an officer “repeatedly” in the face with his video camera but Wong denies this, saying he was shooting a video when the police confronted him.

The Hong Kong Journalists Association (HKJA, 香港記者協會) – which condemned the police actions – said at least 25 reporters have been injured while covering the protests.